And St Francis Bay’s Crystal Hulett  Francis Bay was the highest placed South African in the women’s event. She finished equal fifth overall after being placing third behind surfers Ochoa and Callister in their semi-final encounter. 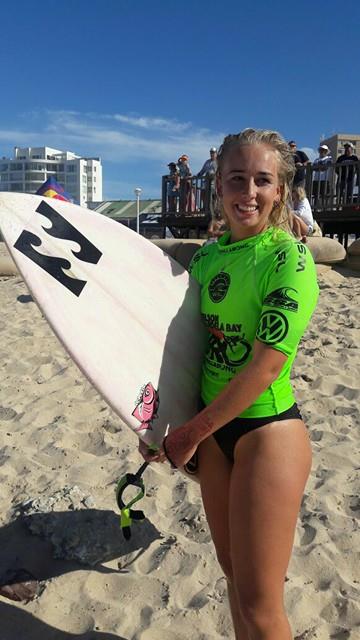 “I really love this competition and I’m very grateful for it, so it’s a nice way to get myself going for the next comp,” said Hulett. “It was tough to find good sections and you had to be very particular in what you do and how you do it. It was very hard, but it was good.”

The Hawaiian teenager won the closely fought final held in contestable shoulder-high waves a day after she won the junior women’s title on Friday. Thisfeat  is considered a rare World Surf League (WSL) double triumph by securing back-to-back victories at the same event, an honour that will be recorded for posterity on the inaugural John Whitmore Cup, the World Surf League (WSL) noted in its press release .

Lucy Callister took the lead in the 20 minute encounter with a 6.87 on her first ride and sat patiently waited for her next wave while fellow Australian Sophia Fulton and McDougall searched for waves with scoring potential. Fulton took the lead and held it for the majority of heat as she built her total with mid-range scores.

McDougall moved into contention for the title with six minutes remaining, finding a long right heading towards the pier that she tore apart for a 6.67. Needing just 4.50 for the lead, the young Hawaiian dissected a rare left with two searing hacks to overtake Fulton.

Ariane Ochoa stayed in the mix but could not complete the big finishes needed to earn higher scores. A flurry of waves in last 90 seconds saw all four competitors post rides but after careful deliberation by the judges, none of the scores altered the outcome and McDougall celebrated on the beach.

“I’m so stoked, it’s the perfect way to end the week and I couldn’t have asked for anything better,” said McDougall. “I was kind of struggling in this final and was pretty tired from competing all day today and all day yesterday. This was probably my worst heat of the week, but I tried to pull it together and luckily, it was close, but I got there. Now I’m just going to cruise and have some fun, maybe surf some different spots before going to Cape Town.”

Earlier on Saturday the top seeds in the QS3,000 men’s event produced a clinic in high-performance beach break surfing as they upped the ante in the Round of 64. This morning just 32 surfers remained in contention to chase the lion’s share of the US $75,000 (about R975,000) prize purse and the coveted 3,000 points awarded to the winner later today, the final day of the event.

The heat of the day was the all-Brazilian showdown where former Championship Tour (CT) fixture and current Qualifying Series (QS) No. 16, Alejo Muniz got off to a sensational start with a pair of excellent eight point rides. But Michael Rodrigues bettered that by closing the heat with rides of 8.70 and 9.0 to grab the day’s highest total, 17.70 out of 20, and advance to the final day alongside Muniz.

“The heat before mine was really slow so my strategy was to try and get two quick waves and I was lucky to get two very good waves in the beginning,” said Muniz. “I didn’t know Michael (Rodrigues) had got even better scores, but I’m really happy to make my first round. South Africa has a special place in my heart, since the beginning it’s always helped me with my campaign and my qualification so I like to be here. I’ve been here for a week already, it’s been amazing, I’ve been surfing fun waves every day, so it’s good times.”

Local wildcards Jordy Maree and current WSL Africa junior men’s rankings leader Jake Elkington, both from Kommetjie, ousted higher ranked opponents to book their places in the last 32, as did 16-year-old Brazilian Mateus Herdy whose phenomenal aerial antics have made him a firm favourite with local fans since arriving in the country two weeks ago.

South Africa’s Michael February, currently No. 19 on the QS leaderboard, confidently won his heat to continue the streak that has seen the 24-year-old Capetonian reach four finals and claim three titles in the country this year by.

“It was tough only starting on the second last day of the competition with all the internationals, so it’s a bit different to the recent local events,” said February. “I’m using the same board I won the Corona Durban Surf Pro on, so I have some confidence coming from that. It’s definitely a positive having 3,000 points at stake. I’ve had a nice run this year but I need a bigger event to improve, so I’m amped to channel everything from the last events into this one.”

February will be joined by fellow South Africans Beyrick de Vries, Dylan Lightfoot and the wildcards in trying to ensure that the SA Open of Surfing title stays in the country, along with the bulk of the prize money and points.

The winner of the Volkswagen SA Open of Surfing pres by Hurley will have his name engraved on the brand new John Whitmore Cup which has been named after the legendary surfing pioneer and first chairman of the national controlling body in1965 (then known as the South African Surfing Association).

An outreach programme will be conducted at the event by Surfing South Africa (SSA) on the final day.  The initiative will involve twenty four surfers from Trafalgar on the KZN South Coast who recently lost all their equipment when their storage hut was set alight by arsonists.

These surfers will be joined by surfers from the Sisonke Surf Club in a Tag Team contest. Eight teams will surf in two semis and a final. The top four teams will be awarded gold, silver, bronze and copper medals.

All the action from the final day of the Volkswagen SA Open of Surfing pres. by Hurley can be followed via LIVE streaming on http://www.worldsurfleague.com and on the WSL App starting from 8.30am.