KwaZulu-Natal Central won the Freedom Cup after obtaining the highest score of  29 450 points at the 2014 Hurley SA Junior Champs in Jeffreys Bay today.

The South African provincial championships were held at Lower Point in 1 metre  waves. (All photos, below) by Alan van Gysen) 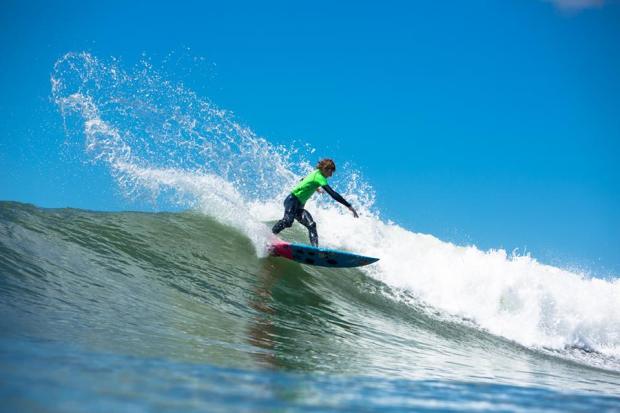 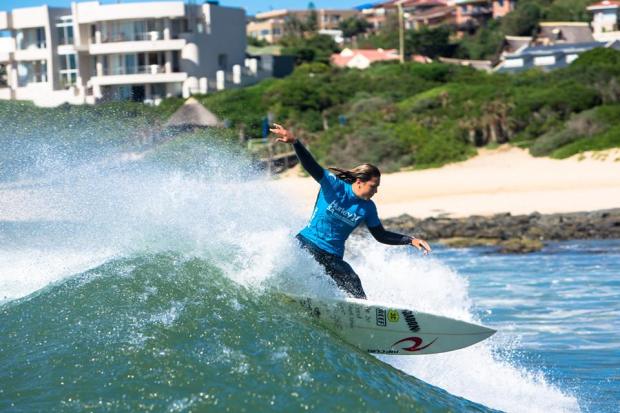 Teal Hogg (KZNC) and Kai Woolf (EP) successfully defended their respective U17 and U13 Girls national titles while Michael Monk (Border) clinched the U17 Boys crown, Adin Masencamp (Boland) added the U15 Boys title to his U13 win last year, Sophie Bell (KZNC) took the U15 Girls crown and Max Elkington (WP) is the 2014 SA champion in the U13 Boys division.

The U17 Girls final started with Anoush Zakarian (Bol) posting an excellent score of 8.50 out of 10, leaving her three opponents needing to play catch up. Hogg steadily built her two wave heat total with long rides, eventually overtaking Zakarian with less than 10 minutes remaining and holding onto the lead for back-to-back titles.

“I’m so stoked to be able to defend my title,” said Teal Hogg. “I heard Anoush’s (Zakarian) first score so I thought I would need two good waves to get ahead of her, and then sit on her, which I did. It was kind of hard, as she is a good friend of mine, but I had to use the tactical approach at the end.”

Ntando Msibi from the SA Development Academy team was first out of the blocks in the see-saw U17 Boys final, but defending champion and Jeffreys Bay local Matthew McGillivray (EP) took the lead with a series of massive manoeuvres on his first ride. Monk weighed in with two great waves to overtake McGillivray who attempted a huge, high risk aerial that he did not ride out of and Monk clinched the title to the enthusiastic delight of his Border teammates on the beach.

Sophie Bell (KZNC) dominated the U15 Girls final by catching the best waves and performing better manoeuvres than her peers to finish well ahead of runner-up Anna Jellema-Butler (WP).

The lead changed hands between the final four competitors in the tightly contested U15 Boys with Adin Masencamp narrowly securing the title with just two minutes remaining and less than one point separating first place from fourth.

Kai Woolf (EP) was the standout throughout the U13 Girls division and finished well clear of Gabi Lailvaux (KZNC) who displayed huge improvement to grab second place.

Saxton Randall (KZNC) started the U13 Boys final with a great ride but was hauled in, first by J-Bay local Angelo Faulkner (EP) and then by eventual 2014 champion Max Elkington (WP), who rode to victory on the biggest set waves.

Shane Sykes (KZNC), who was eliminated in a major upset in the U17 Boys semifinals, was the most impressive surfer at the event and was crowned the Surfer of the Contest, winning the All Aboard Travel / Zigzag Mag award of a free air ticket to join a surf trip where he will be featured in a photo editorial article in the magazine.

Sykes also earned the Oakley Highest Heat Score award for the 16.50 out of 20 he posted in Round 4 on Friday.

The highly prized Skullcandy Team Spirit award justifiably went to KwaZulu-Natal Central whose plans to win the team title and the team spirit award started in January. The whole team stayed together during the event and were motivated by Zulu warrior Bonginkosi Ntuli who collected both the trophies on behalf of the team at the awards ceremony.

The winners of the U17 and U15 titles are automatically included the in Surfing South Africa National Junior Team which will compete in the 2015 ISA World Junior Surfing Championships. Michael Monk (Border), Teal Hogg (KZNC), Adin Masencamp (Boland) and Sophie Bell (KZNC) were presented with their green team blazers at the conclusion of the event