Kelly Slater (US), 39,  claimed a historic 11th ASP World Title this week with his advancement out of  Round 3 at the Rip Curl Pro Search San Francisco.

Slater fought back to an inspired start from opponent Dan Ross (AUS), 28, to claim victory at Ocean Beach in the last few moments

“Rossy (Dan Ross) IOs real dangerous with a little power so I knew he’d be dangerous and I was nowhere to be found in the beginning of that heat,” Slater said.

The iconic surfer from Florida made five of nine Finals this year  and posted three wins. He seems to be surfing at the top of his game.  “This is pretty fabulous,” Slater said. ” I’ve dedicated my life to surfing and competing and to go a whole year and win a world title and have it pay off, it’s really fulfilling.”

Slater’s clinching of the 2011 ASP World Title on Wednesday comes at the one-year anniversary of the passing of Andy Irons. Irons, who is credited with being a defining force in Slater’s career. Irons was once a bitter rival  but became a close friend and confidant to Slater in recent years. The symbolism of today was not lost on Slater.

“It’s a way to celebrate my memories with him and be thinking about him. It’s been on my mind and I wrote a story about him the other day. It’s a time to think back.”

With the 2011 ASP World Title sealed, Slater is now focused on performing in the event at hand, the Rip Curl Pro Search San Francisco. “I’m refocusing on another win here,” Slater said.

“I think 39 is actually pretty young to most people,” Slater said. “I guess in the past, you would top out once you hit 30, but that’s definitely not the case now. I feel like I’m surfing at the highest level of my career and I feel like I can keep going.”

The Rip Curl Pro Search San Francisco is Stop No. 10 of 11 on the 2011 ASP World Title Series with a waiting period from November 1-12. 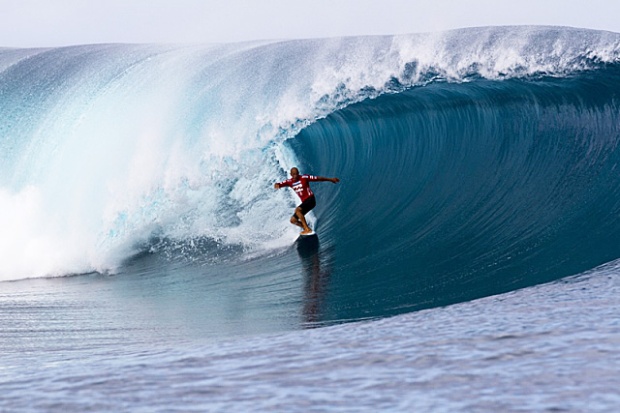 Photo of Kelly Slater when he took out the Billabong Pro Tahiti claiming the frontrunner spot in the 2011 ASP World Title race in the process. Photo Credit: © ASP / Robertson

All articles written, all photos taken, plus all adverts designed, by the Editor and printed in the St Francis Chronicle are protected by Copyright.  Reproduction or copying of any part of the contents of this newspaper and its concept and design can only be done with the Editor’s written permission