Two-time event winner 2010- 2011 and current No 3 on the Jeep Leaderboard surfer Jordy Smith  from South Africa posted a perfect 20 heat total in his Round 3 match-up with 2017 WSL Rookie Leonardo Fioravanti today at Jeffreys Bay in the World Surf League Corona Open event, securing a place in the history books of surfing. 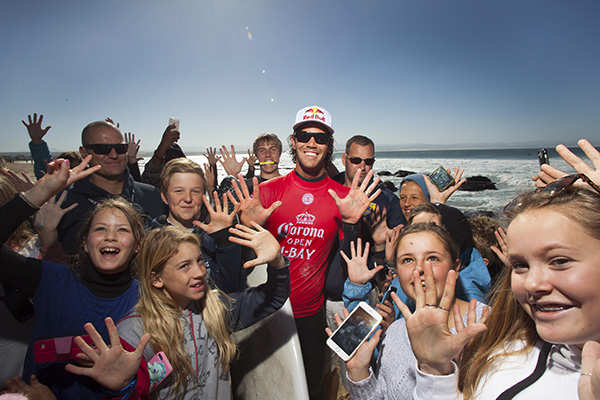 Jordy flashes10s with his fans to celebrtae a perfect 20 in his heat. Credit: © WSL / Tostee

This is the first time anyone has scored a Perfect 20 at J-Bay, plus it is only the 10th time in more than 4o years of professional surfing that anyone has earned this score.

Jordy found the best waves of the heat to deliver two perfect rides. He laid down two huge turns and a deep barrel for 10 points followed quickly by a display of his incredible power surfing and two more barrels for another Perfect 10 to seal his victory and his place in the history books.

“It feels absolutely phenomenal,”  Jordy said. “To be here at J-Bay where the waves are firing and to have that opportunity is incredible. My first two heats were really slow and to get blessed with that was absolutely amazing.

“There’s more waves on offer so I definitely hope there’s more in the tank. You go out there and give it absolutely everything you’ve got. I don’t want to take anything away from Leo, he’s an absolutely amazing surfer especially on the rail. I just had to try and do my best surfing.

“I never in my wildest dreams thought I would get a Perfect 20 and to get it here at J-Bay makes it extra special.”

Commenting, Fioravanti said the waves were perfect and it was a great heat. “I knew two 8s weren’t going to cut it. Every time we had an exchange he always seemed to get the edge.  Jordy is one of the best out there.”

Fioravanti said he went out there to do his best and it was the best heat he has ever surfed. I’m stoked to be part of it. I can’t wait to get over to Tahiti now.”

Fanning and Florence will surf again in Round 5 when competition resumes.

“It was probably the best heat of my life against Mick and John,” Morais said. “It can’t get any better than that with John getting a 10, me with two nines and Mick was ripping too.
2014 WSL Champion Gabriel Medina (BRA) beat  Owen Wright (AUS) and 2017 WSL Rookie Joan Duru (FRA) in the Round 4 Heat 1 in an all goofy affair. The Brazilian took the heat win with an excellent 9.67. Wright and Duru will surf again in Round 5.
“I’ve been surfing a lot recently to try out my boards,” Medina said. “It’s a bit tricky out there but when you find it, it’s so good. I knew it was going to be a tough heat against Owen (Wright) and Joan (Duru) so I’m really happy.”
Earlier in Round 3 Julian Wilson (AUS) posted a Perfect 10 in his heat against Jeremy Flores (FRA).
“What a magic week, that was such a beautiful wave,” said Wilson.
Conner Coffin (USA) also delivered big scores and posted two excellent nine-point rides in the opening 20 minutes of his Round 3 heat to eliminate 2012 WSL Champion Joel Parkinson (AUS) from the competition. The two-time event winner and current No. 6 on the Jeep Leaderboard was left in a combination situation and is sent home with his second 13th place finish of the year.
“It doesn’t get any better than this,” Coffin said. “That was unreal and so exciting. I love surfing against those guys. Parko (aka Parkinson) is one of the best surfers out there so it awesome to have a heat with him.”
No. 1 on the Jeep Leaderboard, Matt Wilkinson (AUS), also made it through Round 3 by defeating Jack Freestone (AUS) in in Heat 12 with a 16.54 heat total.
“It’s really intense being in the last heat of the day because I watched all day, which was tough,” Wilkinson said. “Jack is a great surfer and anyone on their forehand is a danger out there so I knew I would stick to big turns.

Twelve surfers were eliminated from the competition in Round 3 and the remaining 12 battled in Round 4 to directly advance to the Quarterfinals.

Event organisers will reconvene tomorrow morning at 7 am local time to assess conditions and make the next call.