Entangled whale thanks its rescuers 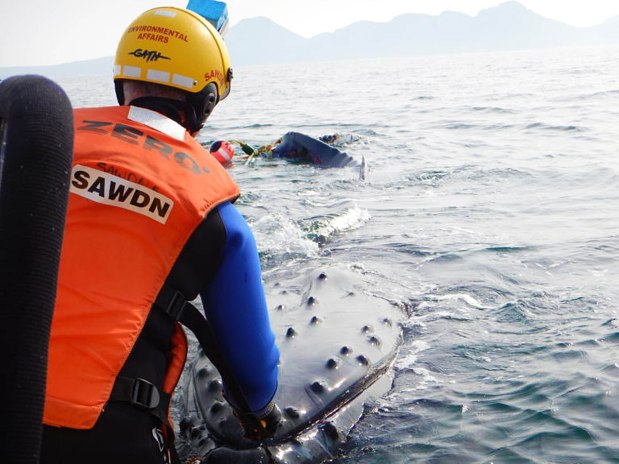 In an incredible show of gratitude a Humpback whale entangled in rope for hours offshore of Cape Point yesterday, thanked its rescuers, a whale disentanglement team and NSRI volunteers.

Once all rope and the floatation buoys were removed, the whale swam right up alongside the sea rescue craft, almost hugging the rescue boat and gently placed his head on the gunnel of the boat, remaining there for almost 20 minutes seemingly staring at his rescuers. All involved described a surreal and emotional moment between the rescue team and the beautiful animal, before it swam off.
The operation to free the whale involving SAWDN and NSRI Simonstown volunteers, lasted 6.5 hours, The whale was entangled in rope and floatation buoys in the vicinity of Rocky Banks  yesterday, 28 August.

Two NSRI Simonstown sea rescue craft were dispatched carrying SAWDN volunteers and the whale, a sub adult 9 meter male Humpback whale was found about 5 nautical miles off-shore of Smitswinkel Bay, False Bay, heading slowly in the direction of Gordons Bay.
Using tried techniques the rescue craft slowly  approached the entangled whale from behind and the SAWDN team, using a grappling hook line, gently placed the line, attached to the sea rescue craft, onto a loop in the entangled rope. The whale appeared anxious and thrashed around a bit, said Mike Meyer, Head of SAWDN. 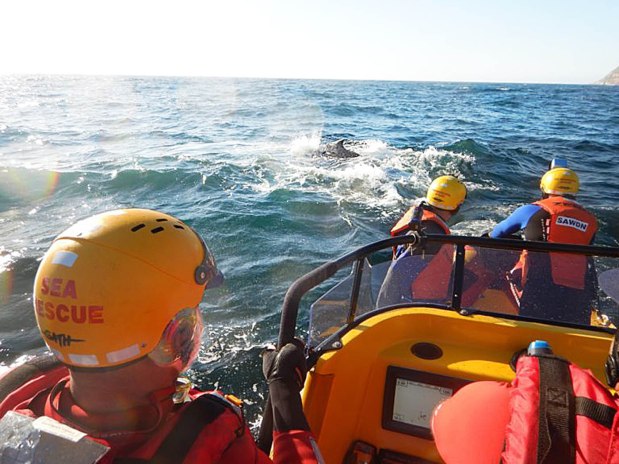 The larger sea rescue craft moved up to head the whale off and this manoeuvre allowed the SAWDN team to begin cutting 9 wraps of rope that entangled the whale. All of the rope and the floatation buoys were cut, removed and recovered. Some of the specialised disentanglement equipment was damaged in the process..
The operation that started at 9.35 am was completed was completed at 3.54 pm. 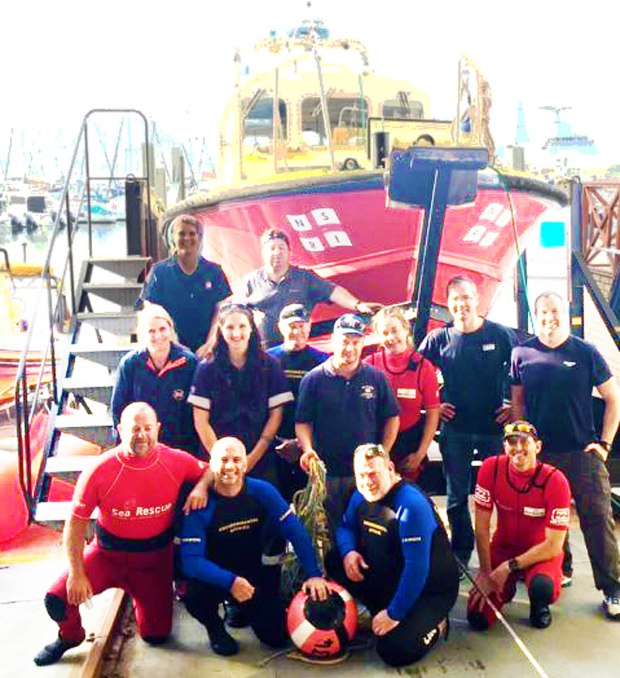 SAWDN was formed in 2006 to deal with increased whale entanglements around the South African coastline.
Increased fishing, fishing techniques and fishing equipment coupled with increasing whale migrations saw a need for a specialised task team to follow in the footsteps of similar disentanglement networks globally that deal with the same scenario of whale entanglements around the world.
SAWDN, a volunteer network, are part of a global initiative to deal with these entanglements.
Spear headed by The Department of Environmental Affairs – Oceans and Coasts SAWDN volunteers include members of The Department of Environmental Affairs – Oceans and Coasts, the NSRI, the Police Dive Unit, DAPG (Dolphin Action and Protection Group), the Natal Sharks Board, Marine Environmental groups, Telkom Maritime Radio Services, Aquatic and Marine organisations and various volunteer Animal Rescue organisations around the coast.
Information, skills, experience and successful techniques are shared between all of the Whale Disentanglement Networks globally.
The costly specialised disentanglement equipment is purchased using public donations.
The equipment is designed and made in the United States and Australia.
Disentanglement equipment is often lost or damaged during operations.
There are no patterns to the number of operations SAWDN deal with each year. One year to the next the number of disentanglement operations varies and various factors contribute to any increase or decrease in the number of operations and may include earlier whale migrations or later whale migrations and the time of the year.
While every effort is made to reduce these entanglements around the world the goal of these global Disentanglement Networks is to effectively respond to reports of entanglements and to release whales from entanglements.
SAWDN gets cooperation and assistance from the fishing community and fishing companies who follow guidelines for fishing practices that are monitored and regulated by The Department of Agriculture, Forestry and Fisheries and by The Department of Environmental Affairs – Oceans and Coasts.
Fishing companies regularly volunteer their fishing boats and crews to assist SAWDN in disentanglement operations and this cooperation by the fishing community and by fishing companies is greatly appreciated.

Category : Uncategorized
Tags : 28 August 2016, Entangled wWhale thanks its rescuers, In an incredible show of gratitude a Humpback whale entangled in rope for hours offshore of Cape Point this past weekend, thanked the whale disentanglement and NSRI volunteers.

One thought on “Entangled whale thanks its rescuers”