With the heavy rains the Sand River is flowing quite strongly and starting to build up alongside the east side of the crossing, aka temporary causeway, which enables vehicles to cross over it.

Two big dams are forming on the left and right on the eastern side  as there is a huge island of sand in the middle of the two dams and it is covered with weeds or reeds.  This island is  effectively blocking the flood waters’  access to the outflow pipe that flows under the causeway.

The flood waters come from the dunes on the far eastern side near Oyster Bay and it is this water that is now  forming dams next to the causeway.  Only a small half metre in width stream is able to get to the outflow pipes. 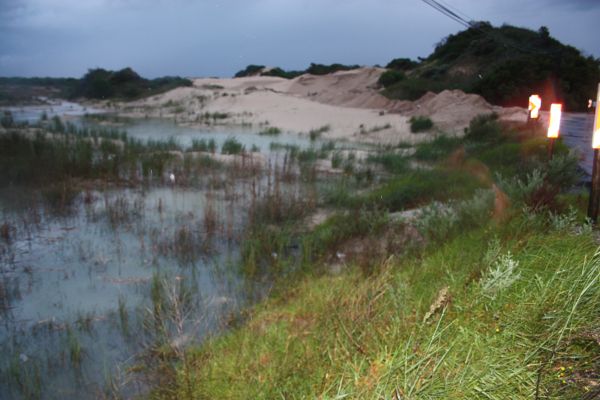 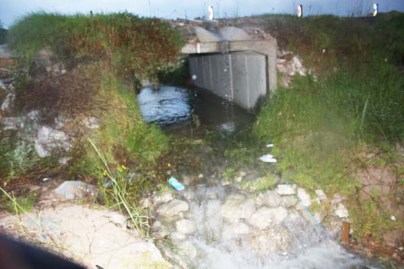 The water is entering  the outflow channel under the causeway  steadily and exiting on the Kromme River side  – but not  fast enough nor rapidly as these photos show.

Observers at the bridge who stopped to look at what I was photographing, say they believe that if the debris and sand is not cleared , allowing flood waters an easy escape route, and if it continues to rain , these dam levels will rise and flow over the causeway as happened in the past.  They say there is no reason to panic  but the dam levels and the state of the causeway  needs to be monitored continually if this rainy weather persists.

The St Francis Bay Kromme Trust warned in May that in the event of floods this winter, there is a very good chance that the temporary Sand River causeway will again be washed away. Then the St Francis area’s towns of St Francis Bay and Cape St Francis will be marooned as has happened four times since 2007.

According to Hilton Thorpe of the Trust, a critical point has been reached with the temporary causeway over the Sand River at St Francis Bay, following destruction of the culvert bridge in July 2011.