In the event of floods this winter, there is little chance that the temporary Sand River bridge will again be washed away.

This will mean the St Francis area’s towns of St Francis Bay and Cape St Francis will be marooned as has happened four times since 2007 According to Hilton Thorpe of the St Francis Kromme Trust environmental organisation, a critical point has been reached with the temporary causeway over the Sand River at St Francis Bay, following destruction of the culvert bridge in July 2011. 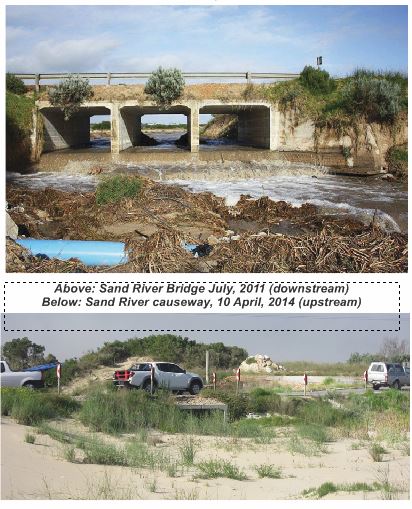 A temporary emergency causeway was built by the Provincial Roads Department but was washed away twice before a more robust structure, with better drainage was put in place. This was later tarred, and has been functioning well.
“However, it has not yet been tested under flood conditions and is in fact, not designed to handle the type of floods experienced in 2006, 2007, 2010, 2011 and 2012. The high-risk months are May – July, and October – November.”
Thorpe points out that construction of the new bridge has been delayed, pending completion of a Basic Assessment, which is awaiting additional hydrological information. “Meanwhile wind-blown sand from the Oyster Bay Headland By-pass Dunefield has been accumulating against the causeway, and is now only about one metre below the level of the road. “Worse, the 6 X 600mm pipes which were installed are now completely blocked under about a metre of sand and only one culvert is functional, compared with three at the time the bridge failed.
“In the event of another flood event this winter there is little chance that the culvert will handle the flood waters.”
Thorpe further says that in an attempt to alert the authorities to the seriousness of the situation, environmental NGO, the St Francis Kromme Trust is trying to persuade the authorities to remove the sand from above the causeway; to complete the Basic Assessment as quickly as possible; and to proceed with construction of the new bridge.
To further stall matters, it has emerged that the emergency causeway did not meet the requirements of the Department of the Environment. “As such is it an illegal structure and is subject to a Compliance procedure,” Thorpe maintains. Pending completion of this process, nothing at all can be done with the Basic Assessment or with the maintenance of the causeway or with the removal of the sand blocking the pipes.”
The Kromme Trust, Thorpe says, is now negotiating with the authorities pointing out the gravity of the threat and suggesting that an emergency situation of this nature cannot be held to ransom through a technical infringement by a government department. This is still in process at the time of going to press.