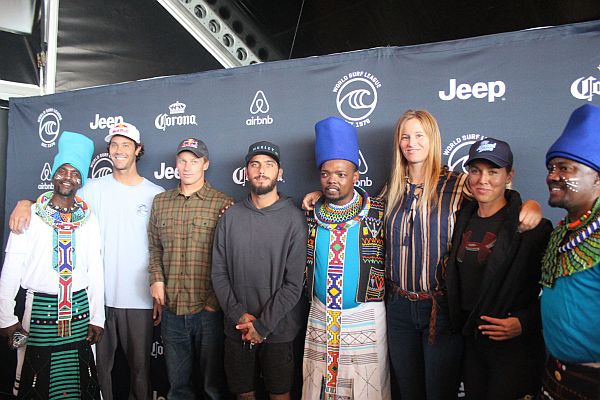 Caption: With three of the African Drumbeat dancers are, Jordy Smith, South Africa, Kolohe Andino from the US, Filipe Toldeo from Brazil. Bianca buitendage from South Africa and Sally Fitzgibbons from Australia.

The event was held to welcome the top World Surf League surfers to the town on the eve of the JBay Corona likely start today, 9 July, with a chance for dignitaries and the SA media and International media to meet the surfers and for the press representatives to ask questions.

It is understandable that late arrivals and jet lag were the reasons for the non-show of top names in the contest. Sadly those waiting for Kelly Slater were disappointed by his absence and those of the other top surfers.

The mayor, Horatio Hendricks and some Kouga councillors were present.  There were great musical rhythms from the popular African Drumbeat dancers, always in attendance at posh events around South Africa and especially in the Eastern Cape. The event itself, however, was lacking in the fanfare of the past. 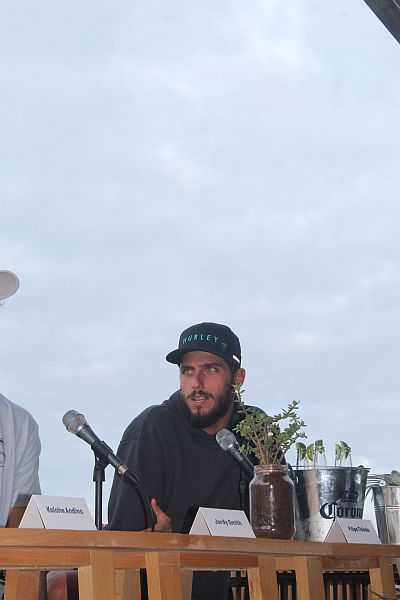 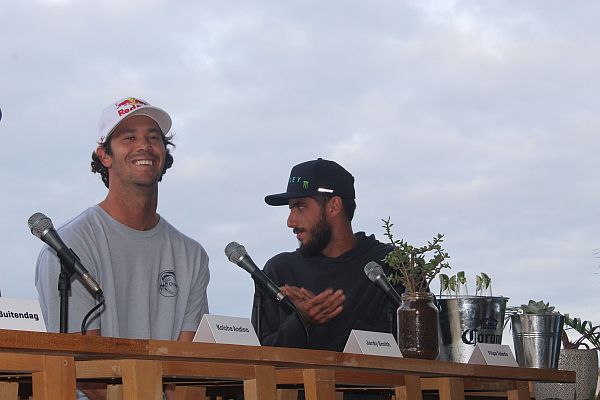 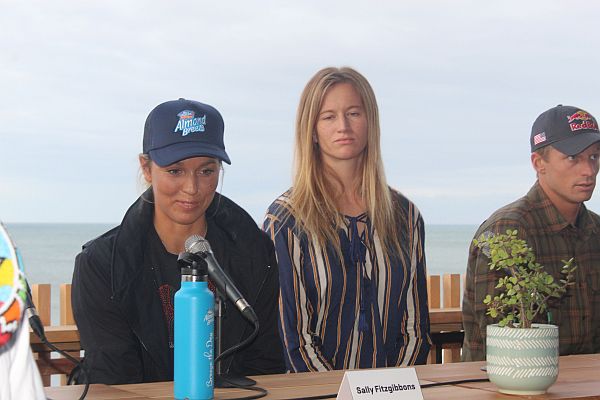 Some surfers have been practising at Supertubes already and spoke about good conditions. Toledo kept turning round to gaze at the waves throughout the media interview session.

When asked to comment most kept their answers fairly short and appeared confident of their chances for a win. They were all pleased to be in the JBay event.

Smith caused a huge roar of laughter when he said he hoped the other surfers would fall off!  Toledo, a hot favourite to win the event was the most serious and Fitzgibbons and Bianca the most smiling and relaxed.

After barely half an hour the media session was sadly over. The African Drumbeat dancers fortunately gave a lift to what was otherwise an extremely low key affair. It was a much played down event with a scarcity of entertainment and refreshments as has been on offer in the past. So instead of lingering after question time to meet and mingle with the visitors and the media as they have done in previous years, the surfers, after posing for a couple of group shots, disappeared immediately.

Start of the Corona JBay Open:

With conditions being good there is a likely start this morning at Supertubes for the JBay Cronoa 2019.

With World No 1 John John Florence (HAW) having withdrawn from the JBay event owing to a knee injury the next in line for the JBay crown,  World No 2 Kolohe Andino (USA), No 3 Filipe Toledo (BRA), and No 4 Jordy Smith (ZAF) are eager to overtake the lead.

“We just need good waves to put some good scores on the board,” Smith said. “Out of anywhere in the whole world, this is where I feel most relaxed, spending time with the people I know, it’s just like I’m competing in front of them again when I was a kid. It fuels my soul every time I come home.

“As far as point-breaks go, Jeffreys Bay is number one. I don’t care what anyone else says until you come here and you actually score this wave. There is no other place like it, no other wave that gives you as much speed as J-Bay.”

Andino has also had a consistent year so far and sits at World No 2 behind Florence. The American is in his eighth year on the CT and hoping for his first Competition Tournament win despite reaching the Final five times. Andino will be up against Yago Dora (BRA) and South Africa’s Beyrick De Vries  in Round 1, Heat 5.

“I am really excited with where I am at this point in the year,” Andino said. “It is by far the best start I’ve ever had and I am just trying to keep my head down and keep working hard. I am not too worried about the Title race or anything like that, it is kind of anyone’s game now. This wave has given me a lot of trouble in the past so I just want to come here and focus on myself. I am excited to showcase what I’ve been working on in my heats.”

Fitzgibbons, who won recently at Oi Rio Pro, leading to her current no 1 ranking, has  been runner up three years in a row for the World title (2010-2012) and hopes for a maiden win this year and qualification into the Olympic Games Tokyo 2020, a dream she has had since a child.

South Africa’s Bianca Buitendag, fresh after her WSL win on her home turf at Victoria Bay in the Western Cape, is also hoping to win in JBay. Competing again as the wildcard, Buitendag will be against Fitzgibbons and Nikki Van Dijk (AUS) in Round 1

Toledo who won the past two years at Corona Open J-Bay is hoping to make a hat trick this year.

Florence is to be replaced by the highest-ranked, non-CT surfer on the Qualifying Series (QS), Jorgann Couzinet (FRA). The courageous Couzinet could cause upsets.

Beyrick De Vries (ZAF) earned the wildcard position as the highest ranking South African surfer on the QS following the Ballito Pro. He, Michael February and Bianca Buitendag are the three wildcards and, together with Smith, there now four South Africans in the event.

“I have been working towards this for a long time,” an excited De Vries said after achieving the wild card in Ballito. “I’m excited to be competing against the best surfers in the world in JBay and I’m going to give it my best shot because I have nothing to lose.”

Mikey February from Cape Town is no stranger to this event. He knows the waves well and could also cause some upsets.