Twenty-nine families lost their shacks   in at least two fires in a Sea Vista squatter camp. The fires occurred on Sunday and Monday this week.

The families lost everything and took shelter in the community hall.   For the first two nights many slept on the floor as there was only one mattress donated and they were given hot soup and rolls with sausages.

But today, 25 October, 100 mattresses and 300 blankets are expected be delivered by a truck travelling  from the Sarah Baartman District Municipality to the fire victims in Sea Vista . 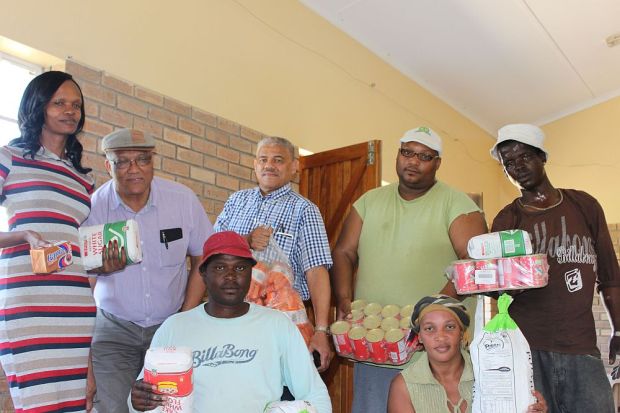 Photos, above and below, by  Bev Mortimer show councillors and officials from Kouga and Sarah Baartman municipalities with some of the food parcels and some of the beneficiaries.

Also today the first batch of 29 food parcels arrived at the Sea Vista Community hall supervised by the fire relief committee of officials from Kouga Municipality and from Sarah Baartman District Municipality.  The value of the food parcels was R43 000.

Officials said the fire victims needed clothes and shoes and oil stoves – the latter for cooking food on.  All sizes of clothing and shoes were welcome and useful, they said. Donations can be made by contacting Phumze (Tel or SMS) on 0633772164 .  Also assistig the fire vicitms is Rosheda Rowlinson who can also be contacted (Tel or SMS) on: 0735136018.

A press statement  received from Kouga municipality yesterday said the emergency room received a call at about midnight on Saturday about a fire that had broken out at the Zwelitsha informal settlement in Sea Vista.  The release, quoting Executive Mayor, Elza van Lingen, said: “Our fire fighters immediately rushed to the scene and found the place in flames. After a long battle the fire was totally extinguished at about 4:30 am.”

Fourteen shacks were destroyed by the fire and several others in the subsequent fire.

The municipal statment also said a number of interventions are currently being put in place to provide immediate social relief for the affected families.  “The municipality has provided the community hall in Sea Vista as temporary accommodation.”

The release said  the municipality met with the SBDM  and the South African Social Security Agency (SASSA) to see what each stakeholder could provide to help the families. “The SBDM will provide hot meals and mattresses while Kouga Municipality and SASSA will provide food parcels to each family.”

The municipality added that the various government departments were exploring further ways to assist.

Category : Uncategorized
Tags : Twenty-nine families lost their shacks in at least two fires in a Sea Vista squatter camp. The fires occurred on Sunday and Monday this week.