A huge fire is raging on Eskom’s nature reserve land visible from across the road from the Sea Vista township in St Francis Bay.

The reserve is neighbouring the Thyspunt area that is one of the proposed sites for a nuclear power station. Over the past few years Eskom bought all this land which was once privately owned, for security and safety reasons.

According to the St Francis Bay police there are many firemen who have been battling the fire in the bushes with fire engines since 10 am this morning. There are also disaster management teams fighting the fire. It is unknown at this stage what caused the fire and if the firemen have it under control.  The relevant Kouga Municipal spokes persons  or Eskom Media personnel could not be reached this afternoon.

A strong wind is fanning the flames and along the R330  to Cape St Francis shortly after the Tarragona Road corner. Motorists are stopping to watch and photograph as sporadic fires are jumping and starting not far from the security fence. The sounds of the fire raging  are extremely loud.

Concerns were expressed by some that the fire could jump the road to the Sea Vista side if the wind changes. However there are firebreaks alongside the fence; 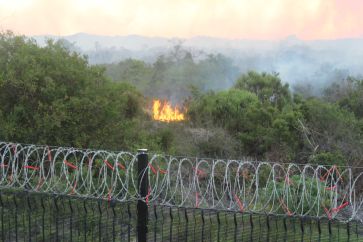 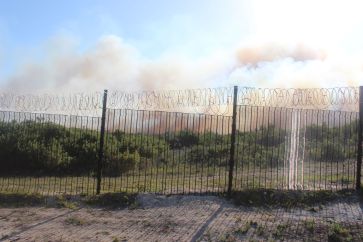 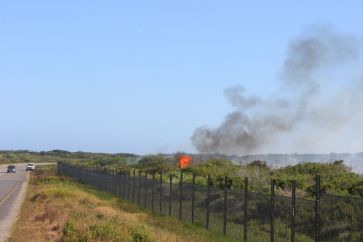 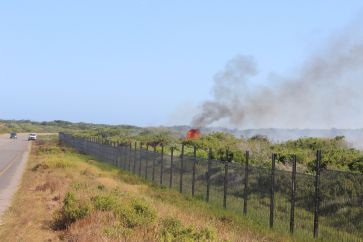 The Eskom reserve which has been cordoned off with fencing because of poaching and theft from occupied and unoccupied houses in the reserve,  has a plentiful supply of wildlife, St Francis Chronicle was told when we visited the area and the Thyspunt site last year. Read an earlier report on poaching and burglaries at this reserve here…

The animals are mostly small but there are plenty of  wild  buck and wild cat species, honey badgers and bush pigs etc and many species of birds and reptiles.

An update will follow..All photos by Bev Mortimer ©