Last night, 25 October, members of the PE Flying Squad discovered 8,5 kg of dagga stashed between furniture and an undisclosed of cash on a truck travelling on the N2 to Grahamstown, plus 667 kg  of dagga worth R667 000 on a supermarket truck travelling to George.

The three suspects at the back with Const Heinrich Dryer and WO Lester Masimla – SAPS Mount Road with the 8,5kg confiscated dagga.

The Squad responded to a complaint of suspicious people off loading items between vehicles at New Brighton beach in Port Elizabeth. They spotted a blue truck and were joined by members from PE K9 and Mount Road SAP.

The members managed to bring the first truck to a halt on the side of the road and arrested three male suspects in their thirties and detained them. They were arrested on charges ranging from dealing in dagga and illegal possession of dagga.  The three are due to appear in the PE Magistrate’s Court tomorrow. 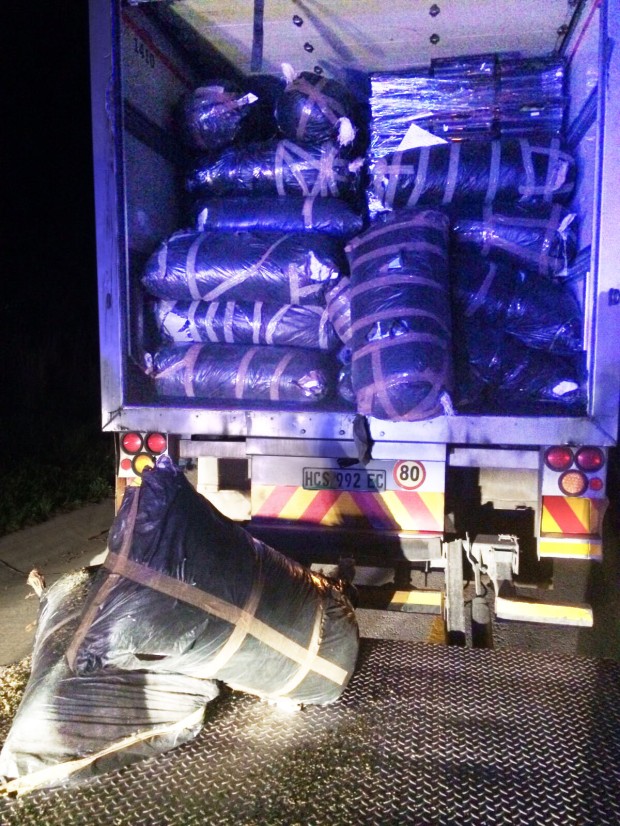 The delivery truck with the dagga in the back.

It then emerged that more dagga was loaded onto another truck enroute to George.  The PE Flying Squad, PE K9, Humansdorp K9 and Thornhill SAPS teamed up and pulled off the supermarket delivery truck about 40km outside PE on the N2 in the Thornhill police area.

Upon investigation 25 bags containing dagga was seized in the back of the truck.

The 27-year-old male driver was detained at Hankey SAPS and was due to appear in the Hankey Magistrate’s Court this morning on charges ranging from the illegal possession of dagga to  dealing with dagga.

Both trucks were confiscated and will be handed over to their righful owners.

The Cluster Commander of Mount Road SAPS, Maj Gen Dawie Rabie, applauded the members for their swift action in apprehending the suspects and he also thanked the community for their involvement.  “I commend the efforts of the members and hope these arrests send a clear message that we  will use all our resources to track, trace and apprehend perpetrators of crimes so they can be prosecuted”, he said.

Category : Uncategorized
Tags : 25 October., 5 kg of dagga stashed between furniture and an undisclosed of cash on a truck travelling on the N2 to Grahamstown, Last night, members of the PE Flying Squad discovered 8, PE cops nab two trucks with big dagga hauls, plus 667 kg of dagga worth R667 000 on a supermarket truck travelling to George.