A preview of Thyspunt

Lush, verdant fynbos, lovely flowering trees, shrubs and plants, rolling hills and the most delightful private beach greeted us on our bundu-bashing drive across Thyspunt early this month.

Two journalists, including myself, were privileged to have a private tour of the beautiful 3 800 hectare Thyspunt site where few modern day humans have ventured and where even less may be able to visit in the future if it is the chosen site for the construction of at least two or three nuclear reactors.

An announcement in this regard could be made as early as April next year Dr Kelvin Kemm says. He also maintains construction could start late next year if there are no hold-ups.

Our hosts were environmental and site manager, Hennie de Beer, and Dr Kemm, a nuclear physicist who was recently appointed to the special South African Ministerial Advisory Council on Energy (MACE). He was accompanied by Dr Kemm’s assistant, Carol van Niekerk, the project co-ordinator of Nuclear Africa.

De Beer drove us around in a huge truck that seated five people comfortably. We were told to fasten our seat belts as we entered from the Oyster Bay side.

De Beer has expertly learnt to navigate these roads racing down slopes or along the straights so as to be able to ascend the incredibly steep, opposing banks. And the seatbelts were a necessity as the sandy roads with big middle ﾑmannetjiesﾒ (ridges) twisted, turned and plunged down steep ravines before mounting the facing hills where they veered round precarious sharp bends on the high hilltops. We all had to literally hold onto the seats and our breaths! 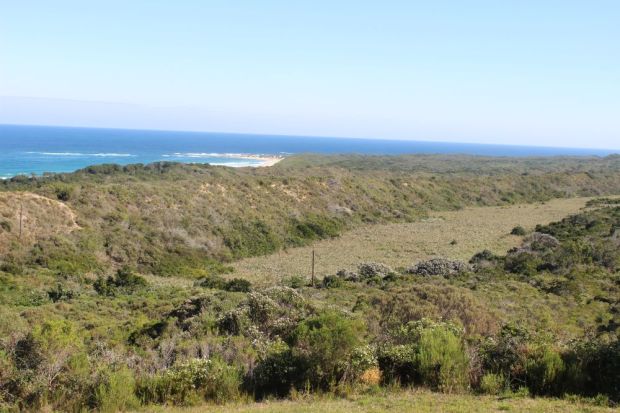 Apart from being a skilful outback driver, De Beer is a nature fundi. He knows the names of the plants, the animals, the birds, the reptiles, the insects and bugs. He took great delight in showing us the area plus in answering our questions.

On the way to the actual site he pointed out various landmarks and stopped at important points. De Beer showed us a cute weather station that monitors the local weather patterns plus some of the more than 200 holes drilled in order for experts to obtain geological, seismic and hydrological data, plus to do archaeological and plant studies and maps. Some of the holes are more than 80 metres deep and the data is important for information needed used to determine the underlying geography and suitability of the site.

We also stopped to view the wetlands and dune bypass system that runs all the way down to the Kromme River and were shown some shell middens of interest to archaeologists. The wetlands will be part of the conservation area where the biodiversity – fauna and flora will be maintained

It was early spring and at some of these stops the colourful flora was stunning and we managed to snap some photos. This was a highlight but the real one was when we were taken to the Thysbaai beach. 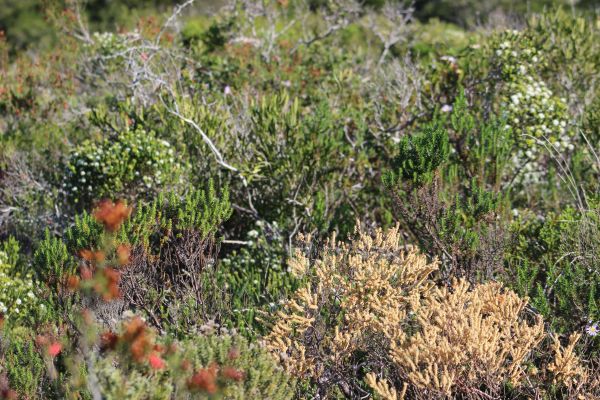 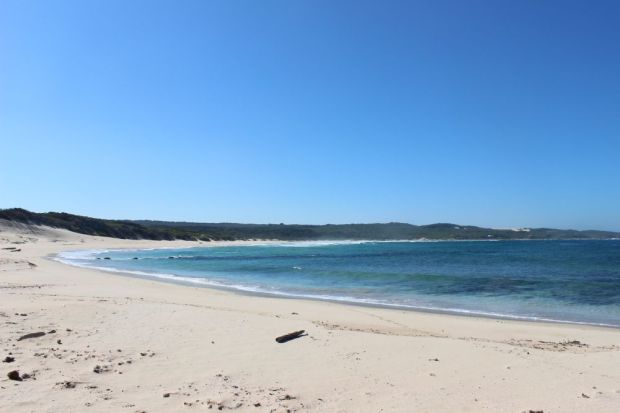 Just before the beach is a protected cove where the Khoisan and other early people used to fish and which is known as the ‘fish kraal’ but there was no time to explore it. Then we trekked across a high sand dune to get to the idyllic Thysbaai.

The beach has a natural inlet from the sea through rocks, on the one side, plus a reef where the waves crash, like on many islands. There is just a vast sea lake and gentle waves lapping on the unspoilt sandy shore about 8 kms long on the left side of the inlet. I would have loved to have spent more time to loiter and swim here.

De Beer told us that if nuclear reactors are built on this site they would be about 250 -500 metres on the other side of the massive sand dune running along the beach. He said the dunes round the plant were around 65-80 metres high and would easily hide the nuclear power plant which would be about 54 metres high, so the plant will not be visible on the horizons.

It was a most fascinating bundu-bashing trip and while it was exciting to think we could be on the footprint of one of the biggest developments in South Africa that could soon become forbidden, fortified territory, it was also hard to imagine a big industrial plant on this out of the way and pristine spot and, after so many delays, starting in 2016.

Category : Uncategorized
Tags : A preview of Thyspunt, lovely flowering trees, Lush, rolling hills and the most delightful private beach greeted us on our bundu-bashing drive across Thyspunt early this month., shrubs and plants, verdant fynbos