Shark bite victim, Dylan Reddering , about to be transported to hospital

A 23 year-old man was bitten by a shark at Plettenberg Bay yesterday, 26 June.

Dylan Reddering, a student at the University of Cape Town (UCT), suffered lacerations and bite marks on the right side of his body, on his ribs, on his buttocks and on his leg.

The shark is suspected to have been  a 2-3 metre white shark as white sharks are common in the area.  Reddering, the son of veteran NSRI Plettenberg Bay volunteer crewman, Marty Reddering, was rescued by fellow surfers Lloyd Chapman, Adriaan Augustyn, Wotjeck Orzechowski and his son Tadj. 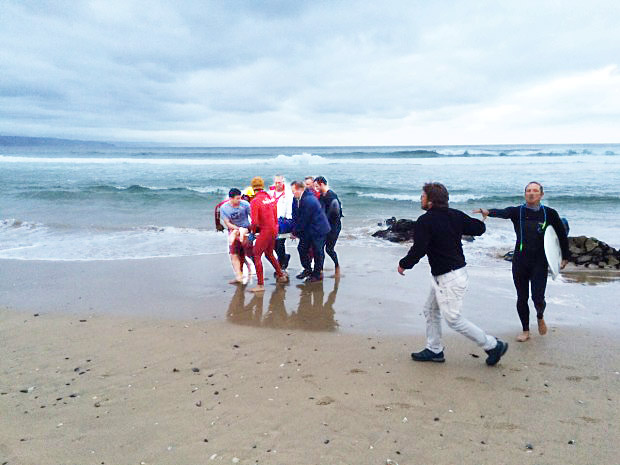 Dylan Reddering being  helped by fellow surfers and medics

Deon Truter, NSRI Plettenberg Bay station commander, said  at 6.15o pm in the evening the NSRI volunteer duty crew were activated following reports from eye-witnesses about a surfer having been bitten by a shark at Look Out Beach, Plettenberg Bay.

The bite marks were deep but Reddering remained calm, in good spirits and was in a fairly stable condition, Truter said.  He was carried aboard a surf-board to the Look Out Beach parking area where he was loaded into a Baycare ambulance and transported to hospital with medical care continuing en route to hospital.  He was later transferred to a hospital in Knysna.

One of the bite marks on the surfboard…

He also said bite marks appear on the surf-board and these marks, an account of the incident, and the bite marks and lacerations sustained by Dylan will be investigated by authorities as part of ongoing shark encounter research.

“Bathers and surfers are urged to be cautious in the area following this incident particularly with the start of the Winter holidays,” Truter said.

He added that caution is advised and the public should rather stay out of the water.