Daphne Kettledas, Kouga’s first woman mayor is a determined, self-driven woman who has climbed through hard work and study to the upper echelons of society, who is much admired and who has earned the title ‘a people’s person’. 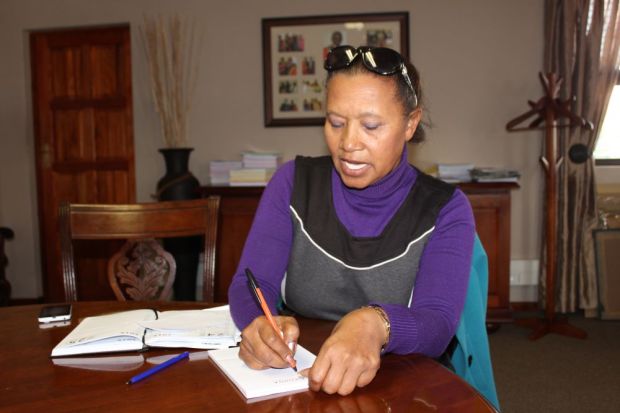 Invited by Kouga’s ANC to contest for the mayoral chair vacated by Kouga’s previous mayor, Booi Koerat, who stepped down owing to poor health, Kettledas courageously accepted to be a candidate. Kouga councillors voted for their favourite out of all the candidates and Kettledas was pronounced the winner.

She said accepting this responsibility as a woman demonstrates equal representation in leadership positions. Her appointment as a woman is a sign and encouragement to all women to believe in themselves and improve their stations in life and it means South Africa can have a first-ever woman President.

On the subject of women she believes women can do many things better than men and she believes in empowering all the Kouga staff, especially the women.

As a woman she has experienced family life with children but also sorrows and death, she said shaking her head in sadness. She lost two children of her own and she lost a sister.

Such is the caring nature of Kettledas that she took her sister’s children into her home and brought them up as her own along with her son, Ray. Plus she also became mother to her daughter’s two children and her brother’s one son, Jean.

On a teacher’s salary and with her husband no longer able to work after a lung problem, Kettledas took on part time work to supplement her income during the school holidays. She worked for some estate agents in St Francis Bay and is fondly remembered by them – some even pronounced her as “Fantastic!”.

Daphne at her induction ceremony  when she became Kouga’s first woman mayor this month (June 2015).

Another trait that Kettledas has is one of resourcefulness and the determination to succeed and to never give up. With her husband ill no one was available to cut the lawn on the very big piece of ground around the house in Humansdorp. So she got up at 5 am, rolled up her sleeves and did the job –“and I got everyone to bring me refreshments while I was at it,” she smiled.

On another occasion she recounts a toilet needed to be installed and there was no one to do the job. She hit a big hammer on the back wall and pushed the loo through the gaping hole in the wall!

Asked on her plans she has as mayor she said she was led by the ANC but did believe in core essentials and would push for those – things like the right for everyone to have clean and running water, electricity and proper toilets. Asked about the bucket system, still prevalent in places like Sea Vista, she said she would like to have this system eradicated.

But she pointed out the land at Sea Vista belongs to the Department of Public Works and the transfer of this land to the Kouga Municipality is still being processed. Only when this step has been completed can Sea Vista residents get improved services and RDP houses. She said there were 2000 homes earmarked to be handed over but admitted this was not enough for all those waiting in Sea Vista for houses.

She admitted there are service delivery challenges facing her and her mayoral team and that collective action was important, “I am inviting all members of the Mayoral Committee to continue rendering their services to our people with the commitment they deserve.”

She said in her mayoral acceptance speech that she is honoured to lead, to have an open door and to listen to all the people and benefit from their experience and aspirations. “This municipality does not need good plans and well-set targets only. We need to work together across the political divide.”

Kettledas was a former teacher and seasoned political activist before being elected to the mayoral position on 11 May 2015.  Born and bred in Humansdorp, where she also taught for 31 years at Graslaagte Primary, she is no stranger to the people of Kouga.

She became involved in politics during the 1980s as a student and has since been active in various political structures.

Initially unable to study for matric as there were no high schools that offered matric for black and coloured learners in the Kouga area in the apartheid years, she completed Standard 8 and then obtained a Primary Teacher’s Diploma (PDT) at the Dower College of Education, in Uitenhage.

She started teaching in 1975 at the Hankey Primary School. During the same year she married David Alexander Kettledas. This year 2015 the pair celebrates their 40th Anniversary on 27 September.

In 1978 Kettledas returned to Dower College in Port Elizabeth and obtained a Primary Teacher’s Diploma: Special in Physical Education. This explains her current passion for keeping fit through jogging.

The same year she successfully applied for a post at Graslaagte Primary School and also obtained her matric certificate through home schooling. Not satisfied with this Kettledas continued her studies and ended up obtaining a Higher Diploma in Education in 1990, plus a Bachelor of Arts Degree which she obtained from the University of Port Elizabeth in1999.

After the launch of the South African Democratic Teachers’ Union (SADTU), the biggest teacher union in the country in 1990, Kettledas became one of its first members in the Kouga and Koukamma branch. It was her display of leadership at SADTU that had the ANC branches in the area electing her to serve on the old Tsitsikamma Regional Executive Committee, where she also elected to serve on the Regional Working Committee.

And her excellent leadership skills also led to her being nominated as mayor of Kouga 2015.

But she is also very much a family person and as a woman she loves to busy herself in the garden or with sewing and cooking. “And I just love dancing and rugby,” she adds.

Category : Uncategorized
Tags : Booi Koerat, Daphne Kettledas, Face to face with Daphne Kettledas, Invited by Kouga’s ANC to contest for the mayoral chair vacated by Kouga’s previous mayor, Kettledas courageously accepted to be a candidate, Kouga’s first woman mayor, Kouga’s first woman mayor is a determined, self-driven woman who has climbed through hard work and study to the upper echelons of society, who is much admired and who has earned the title ‘a people’s person’., who stepped down owing to poor health