Two men were rescued after they became battered by waves onto rocks, sustaining severe injuries at the Robberg Nature Reserve, Plettenberg Bay today, 17 May. 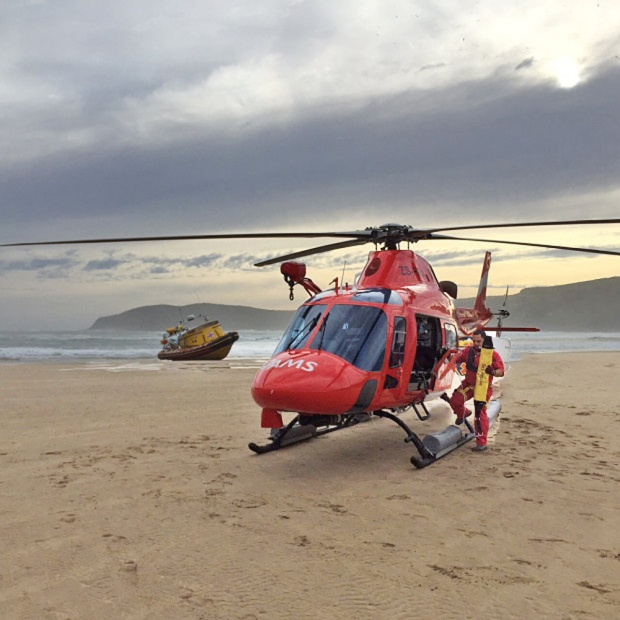 Both men were admitted to hospital, one was transported by helicopter.

The men were injured when one of them was washed by waves into the sea. His companion jumped in after him in an attempt to save him.

The NSRI were activated at 2.18 pm after an ex NSRI crewman, Dr Herman Nel, perchance came across the one injured man while hiking with his family in the Reserve.  The injured man was with some Canadian hikers who found him first. The other man was missing at that point.

Dr Nel began emergency treatment on the 39 year-old man suffering multiple lacerations, plus severe bruising to his body, arms and legs, as well as suspected fractures to his right arm and his leg.

The patient related that he and his 34 year-old companion, from Vanderbijlpark on holiday in Plettenberg Bay, were taking pictures of the sea when the elder was swept off the rocks into the sea. His younger companion had jumped in after him but was swept away in rough sea conditions into a gulley.

The elder managed to get out of the water onto rocks. Fearing that his missing friend had drowned he crawled over rocks towards the beach to find help when the Candadians found him and soon thereafter, Dr Nel came that way.

After securing the first patient on the beach Dr Nel and a friend, Andre Barnard, went in search of the younger man. They also reported a missing man and suspected drowning to the NSRI.

The pair found the young man among rocks in a gulley in the sea. The man had been battered by swells in a rising sea tide and suffered multiple lacerations, bruising, a head injury and a suspected fractured spine.

Dr Nel and his friend managed to move this second patient by securing him to a trauma board and to higher ground out of danger of the rising high tide.

The second patient, suffering a suspected fractured spine and multiple lacerations and bruising, was secured into a specialised hoisting stretcher by the helicopter and taken to the Robberg Nature Reserve car park where paramedics continued with medical treatment.

Both men were taken to a hospital in George. The elder was transferred by ambulance but the younger was transported by helcipter and admitted for surgery.