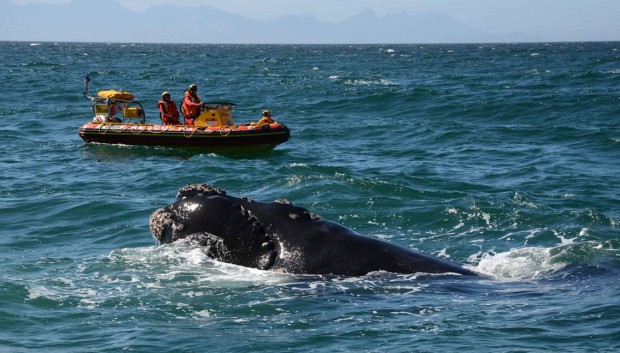 The whale was distressed from being entangled under water and struggled by thrashing about to get above water to catch its breath before it was freed.

According to the NSRI, at 8.20 am today, 15 March SAWDN was activated following eye-witness reports of a whale appearing to be in distress off-shore of St James Beach on the False Bay Coast, Cape Town.

Members of SAWDN responded to the land side in an NSRI sea rescue vehicle while NSRI Simonstown responded with its sea rescue craft Eddie Beaumont II .and SAWDN equipment housed at NSRI Kommetjie and at the Shark Spotters. The equipment was mustered and taken to Simonstown Harbour where the private boat Awesome was launched with SAWDN members and the SAWDN Disentanglement equipment.

On arrival Dave Hurwitz of SAWDN related that two lines were found to be keeping the whale trapped under water. The young whale had to lunge itself up to get above water to gasp for air before being pulled back down by the rope lines. The whale was very lively. 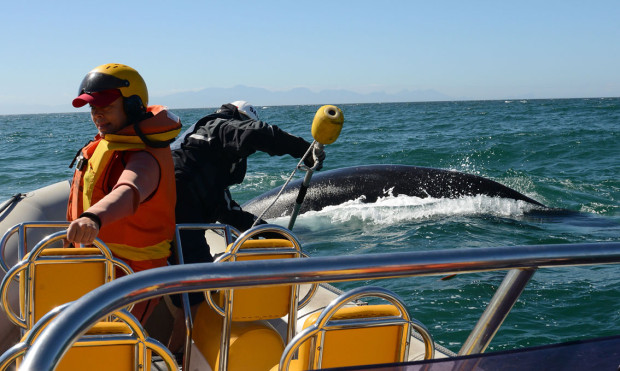 The SAWDN team cut a rope about a meter from the tail and this enabled the whale to become mostly disentangled. It was then able to rotate its body and much of the rope automatically became disentangled. After another rope was cut the whale was completely free.

The whale swam off confidently.  SAWDN volunteers continued to monitor it for a while and the whale seemed to be healthy and swimming along strongly. The operation to free the whale was completed by about midday.

Later, eye-witnesses reported seeing a juvenile Southern Right Whale swimming in the area in the vicinity of Murdoch Valley. SAWDN volunteers believe this is the same whale.

SAWDN  is a specialised network of volunteers set-up in 2006 to deal with these types of situations and comprises volunteers – from NSRI, the Department of Environmental Affairs – oceans and coast, SA National Parks, Cape Nature, the SAP police services, various Aquariums from around South Africa, the Natal Sharks Board, Bayworld, various other organisations and volunteers, with the support of the Dolphin Action and Protection Group (DAPG).