Two St Francis residents narrowly escaped serious harm when they were involved in an almost head on collision at the corner of Tarragona Road and the R330 to Cape St Francis this evening around 5.30 pm.

The car Emily was driving 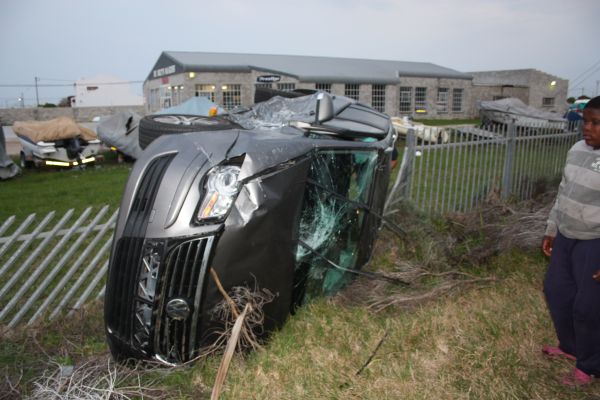 The driver of the one vehicle, Emily O’Bray, miraculously was uninjured when the car she was driving  rolled four times after the collision. It came to a rest rest on the passenger’s side with the car’s undercarriage facing Humansdorp , off the road against against Du Bruyn Marine’s fence.

Emily was alone in the car at the time and fortunately her children had not been in the vehicle. According to her husband, Stuart, Emily was unhurt and after being examined by a doctor she was taken home suffering from shock.

The other driver still at the scene appeared very shocked and did not wish to be named or to speak to the press.

Traffic police said Emily had been travelling towards Cape St Francis along the R330 and the other driver was turning into Tarragona Road from the R330 when the two cars collided.

Category : Uncategorized
Tags : Two St Francis residents miraculously escaped serious injury when they were involved in a head on collision at the corner of Tarragona Road and the R330 to Cape St Francis this evening around 5.30 pm.