Sarah Baum claimed the silver medal in the Women’s division as Team South Africa finished sixth on the final day of the historic ISA China Cup on Hainan Island in China earlier today. 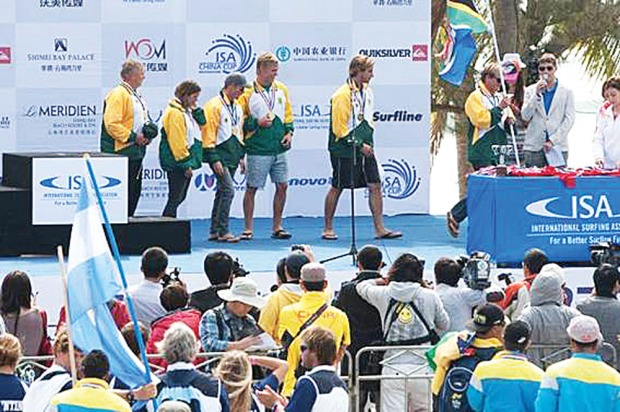 The 17 year-old from Athlone Park south of Durban placed second to former ASP and ISA Women’s World Champion Sofia Mulanovich (Peru) in the 40 minute Grand Final after having to battle her way through a tough Repercharge heat to reach the final four.

Baum, the only member of the six strong SA squad to qualify for the final day of competition, started today’s quest for a medal with a frustrating performance in Round 3 of the Qualifying stream. Struggling to find the waves with high scoring potential she earned a heat tally of just 6.53 out of 20 to place fourth and drop into the Repercharge final.

But there the teenager displayed the grit, determination and talent that will see her claim many future victories. She overcame another slow start and posting scores of 6.83 and 6.33 (each out of 10) to overtake France’s Justine Dupont and Pauline Ado and Australian Jessi Miley-Dyer to win the heat and take her place in the Grand Final.

Diana de Souza (Brazil) took the early lead in the final but Baum forced her way back into contention for the gold medal with an excellent, manoeuvre packed ride of 7.70. Trailing Mulanovich, who produced the heat’s highest ride of 8.80, and de Souza, Baum found a great wave in the final minutes and earned 6.0 from the judges which gave her the silver medal.

The men’s gold medal was deservedly won by Heath Joske (Australia) who capitalised on a surge of great waves towards the end of the Grand Final to move from fourth to first, relegating Cory Lopez (USA), Marc Lacomare (France) and Nic Muscroft (Australia) to silver bronze and copper medals respectively. Joske posted four of the top 5 individual rides and three of the top four heat totals during the event.

Joske’s victory and Muscroft’s finals appearance was sufficient to see Team Australia clinch the inaugural ISA China Cup and the team gold medal ahead of Team France. South Africa could not recover from their disastrous first day performance where all four of the men’s squad were eliminated from the event and finished sixth in the eight team tournament.

Team SA did redeem itself by bagging the bronze medal in the Aloha Cup event yesterday when they finished third behind winners Peru and runners-up Australia in the tag team format.

ISA President Fernando Aguerre, whose dream to develop surfing in China was being realized, was all smiles and compliments at the closing ceremony for the ISA China Cup, saying “This is the first but not the last ISA China Cup that we’re going to run in this country; next year we’re coming back to continue to make inroads to surfing in China.”

The Hainan Riyue Bay International Surfing Festival presented by Quiksilver continues with the Hainan Classic, a 4-Star rated, US $95 000 ASP event starting tomorrow and running until 14 January at the same venue.

2 thoughts on “Sarah Baum takes home the silver for SA”