Travis Logie advanced through two rounds of competition in huge waves at the Billabong Pipe Masters in Memory of Andy Irons in Hawaii yesterday. 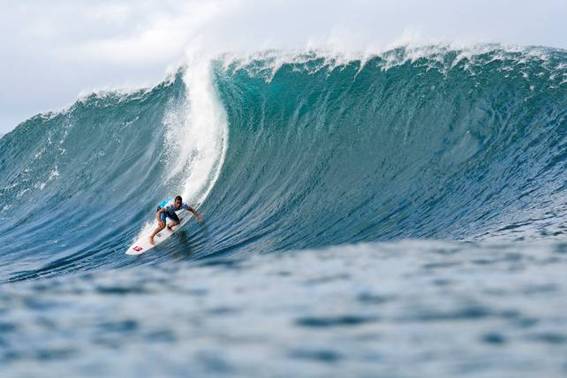 Travis Logie drops into a wave at the Banzai Pipeline in Hawaii yesterdayi. The Durbanite advanced to Round 3 of the season-ending Billabong Pipe Masters in Memory of Andy Irons and clinched a spot in the 2012 ASP World Title Series. Credit: ASP / Cestari

In three to five metre surf, described as the biggest in the 30 year history of the event, the world’s best surfers caught rides that ranged from sublime, perfect 10 point scores to life-threatening wipeouts as the local Hawaiian contingent cut a swathe through the World Tour contenders.

Logie secured two low-scoring victories, defeating Hawaiian wildcard Bruce Irons (HAW) by 3.57 to 2.70 (both out of 20) in Round 1 before narrowly outpointing Tiago Pires (PRT) by 5.80 to 5.67. Logie faces teenage Brazilian Prodigy Gabriel Medina in Round 3 but is already guaranteed a haul of 1 750 points which sees the 32 year-old Durbanite rise from No. 33 to No. 31 in the rankings.

Current Vans Triple Crown of Surfing ratings leader and North Shore local John John Florence, 19, who lives right in front of the famous Banzai Pipeline break, navigated the lineup with ease to eliminate Maui native Kai Barger (HAW), 22, in a commanding Round 2 performance while securing the first perfect 10-point ride of the event.

At the other end of the scale, Australian big wave standout Laurie Towner took the worst wipeout of the day, slipping from his board and skimming inside of the barrel before being annihilated by the cracking lip. He was removed from the lineup by jetski with a dislocated shoulder, shredded knee and punctured foot.

Evan Valiere (HAW) recorded the top heat score of the day – 18.16 out of 20 – in his Round 1 defeat of compatriot Frederick Patacchia while the fickle nature of the waves was demonstrated in Heat 5 of Round 2 where Hawaiian local Aamion Goodwin dispatched ASP World Tour veteran and renowned big wave rider Taylor Knox with a heat tally of 2.20 points to 2.13.

The swell is expected remain double to triple overhead for the start of Day 2, gradually dropping in size during the afternoon. A decision will be made at 8am in Hawaii (8pm in South Africa) on when to resume the event with the top 12 seeds entering the fray for the first time in Round 3.

The Logie vs. Medina match-up will be Heat 7 and Jordy Smith (Cape Town), ranked ASP World No. 6 coming into the season-ending event, will take on Hawaiian Shane Dorian in Heat 10.