Overall winner for day 1 of this year's Calamari Classic Golf at St Francis Bay Golf Club, Garth Enslin, is seen with his prizes handed to him by Juanita Watts, event manager of today's sponsor, Barloworld Equipment.

In spite of fierce winds that wracked havoc with most players’ swings, putting and drives, Garth Enslin took the 1st place prizes on the first day of this year’s Calamari Classic Golf at St Francis Bay Golf Course.

The day’s sponsors, Barloworld Equipment were thanked for their great sponsorship and prizes to the winners that included delightful miniature tip trucks.

The day went off without a hitch in the morning as golfers teed off in fair weather and under mostly sunny skies. But then the wind came up just after lunch causing many upsets. Those that teed off at sparrows this morning had a much better golfing day than their counterparts who arrived on the course much later, causing St Francis Bay Golf Club captain, Charlie Byl, to quip at prize giving: “All those who did not want to get up early to play golf were punished by the wind!”

But the ambiance on the course and the surprise treats of pastries from Viking Bakery and different snacks and refreshments from suppliers or sponsors at several holes were most welcome and made up for the nasty afternoon weather. Then the great vibe at the packed clubhouse with jovial players, family and friends was a fine start to the evening’s proceedings. 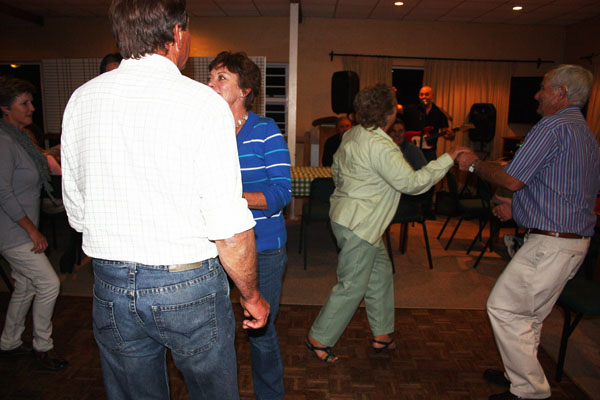 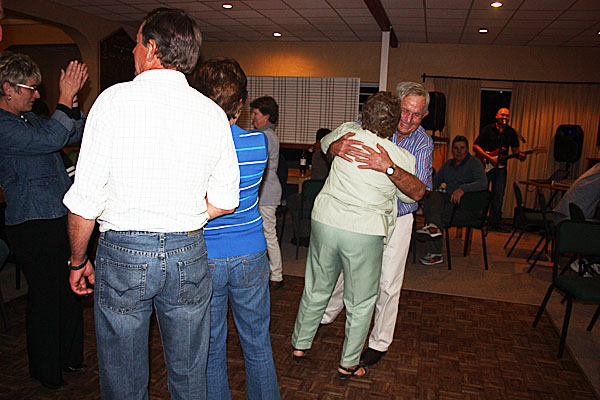 After prize giving and supper St Francis Bay’s resident DJ and great muso, Johan Cronje, who had swapped places with Thommo for the night, took hold of the mike and his red guitar to put everyone in a party mood. And people started dancing the night away in earnest.

All articles written, all photos taken, plus all adverts designed, by the Editor and printed in the St Francis Chronicle are protected by Copyright.  Reproduction or copying or changing of any part of the contents of this newspaper, its articles or concept and design can only be done with the Editor’s written permission.