“Unfortunately the offer by a canal home owner to cover the costs of establishing the revetments is no longer available and as a result the RHOA will be looking to all canal owners to finance the construction of the revetments,”  a press release from the RHOA said.

“The funds raised several years ago from canal home owners for this purpose have been ring fenced in the RHOA accounts and will obviously be taken into account when funds are called for from all canal home owners.”

The press releases states that the RHOA believes it is correct in applying for revetments despite objections from SIC (The Danish company that was awarded a contract to protect the St Francis Bay beach from further erosion). SIC maintained the PEM System was effective in protecting the spit from further damage.

The RHOA says these photos taken in the last week prove beyond doubt that this is not the case: 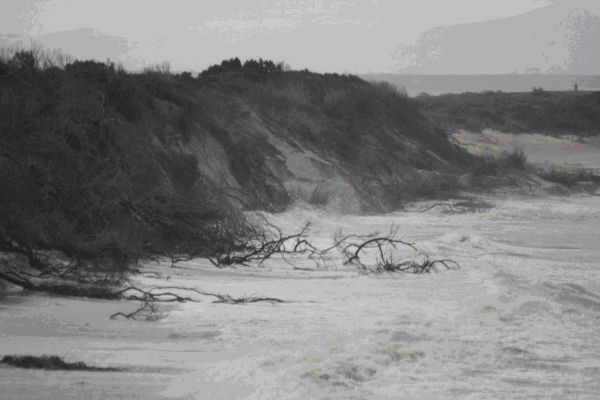 “The preservation of the canal system and the Dune Spit remain the RHOA’s most important objectives,” the canal entity says. “We look forward to the unanimous support of all our members for this process.”

Last year in consultation with Dr Werner Illenberger and Frank Silberbauer the RHOA initiated an application with the Department of Environmental Affairs (DEA) for the establishment of revetments at the Spit.

All articles written, all photos taken, plus all adverts designed, by the Editor and printed in the St Francis Chronicle are protected by Copyright. Reproduction or copying of any part of the contents of this newspaper and its concept and design can only be done with the Editor’s written permission